You are here: Home / Purpose / 7 Things To Keep In Mind Before Your Home Schooled Teen Goes To High School

We never intended to homeschool but a problem with our son’s 4th-grade teacher left us with few options. I was scared to death and was positive I was going to ruin my kid’s life but much to my surprise, we loved it! We loved having the freedom to choose what, how and when he studied and we ended up homeschooling him through 8th grade.

Our plan was always that he’d go back to school for high school and he did and it has been great. But, it could have been so much better and easier for him if we had known then what we know now. Over the last few years I’ve talked to several other moms whose families made the same choice and I realized that there were a few things we all wish we had known or focused on a little more. Hopefully, your family can benefit from our collective experiences.

1. Make sure they have good notetaking and study skills.

These are a must. I’ve talked with so many moms whose kids went to a traditional high school after being homeschooled and almost all of them said they wished they had spent time teaching their kids study skills and how to take good notes during a lecture. If you aren’t sure what to teach them then look online for a tutor that specializes in study skills or there are tons of resources online that can help you create your own course.

While you’re at it, go over test-taking skills as well. Chances are, your student isn’t used to the kinds of tests they’ll take at school.

2. Teach them how to deal with feelings of anxiety and overwhelm.

They’re both going to happen, likely more than once. We all know being a teenager is hard—especially now, but, I’d argue that it is especially difficult for the teens going from being homeschooled to a regular classroom. They’re going through all the things every other teen is going through but they’re also trying to figure out where they fit in socially in an environment that is completely unfamiliar to them. They’re going to get overwhelmed. They’re going to deal with some anxiety.

3. Make sure they know how to ask for help when they need it.

Asking for help is hard for a lot of us. It’s especially difficult if you feel like you’re the only one that doesn’t get something. Your homeschooler hasn’t been in a classroom lately, if ever, so there are going to be things they don’t understand or know how to do and they need to know how to get the help they need.

4. Don’t register for advanced classes during their first year.

Even if your little darling has been doing college-level work since they were 9, please don’t. They may be fine with the material but there will be so, so many things for them to adjust to and handle already, taking those advanced, AP, or IB classes will put so much extra pressure on their shoulders. More pressure is the very last thing they need.
I know because we made that mistake. Thankfully, it was only 2 classes but it made an already overwhelming situation so much more difficult. At registration, all we thought about was the difficulty of the course but we should have been thinking about how the additional workload and harder tests would impact our son.

5. Take advantage of the school tours before and after registration.

Let them figure out the best routes to take between classes, where the restrooms are, how to get to the cafeteria, the library, and the gym. Help them figure out where to get on the bus or where they’ll be picked up. If your student drives, make sure they know where to park before the first day of school. The student parking lot is anarchy on the first day of school and trying to find their parking space is more stress than they need on their first day.

6. Make sure they get involved.

They’ll settle in and find their tribe of real friends so much faster if they get involved with an extra-curricular activity. This is especially important if your teen is an introvert because chances are; it’s harder for them to make friends. If they don’t already have a thing-like a sport or music or dance, do some investigating. I promise you there will be something they can get involved with so do them a favor and insist on it.

If there is just one thing you take from this list, let it be this. Make “Less Talking, More Listening” your new mantra. Your teen is going to be hit with so many new situations and challenges and people. They’re going to need to be able to talk about things and you want to be the person they come to. Make sure you ask open-ended questions. They learn to give one-word answers much faster than you think. If they do share willingly, it may seem like some of the things they share aren’t a big deal, but if they’re talking about it, it’s of interest to them, which means it’s of interest to you. More importantly, if they know you’ll listen when they talk about the smaller stuff, they’re going to be much more likely to come to you when something really big is happening–and it will. Keep the lines of communication open!

There are going to be things you forget. It’ll be ok.

These are some of the things that have been mentioned the most often during my conversations with other moms about all the things we wish we had known before sending our homeschooled teens to a traditional high school. In the end, no matter how many blog posts or articles you read, no matter how much you obsess, you’re going to end up with a million things on your list of things you wish you had done. The fact that you care enough to be researching this at all tells me things are going to be just fine.

More than anything else, please enjoy these years with your teen. They pass way too fast!

Previous Post: « If I Could Send A Letter To My 16-Year-Old Self
Next Post: 40+ Self-Care Ideas For Busy Moms » 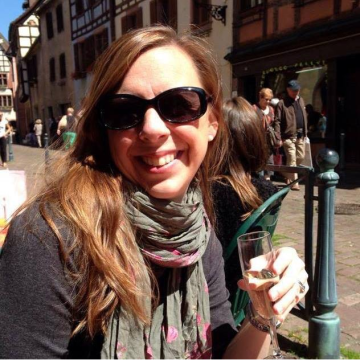 Hi there, I’m Elizabeth. I’m a 40-something wife and mom, lover of coffee, caramel, and spicy foods. I started Grits, Grace, and Gumption for the midlife mom who is staring at a rapidly approaching empty nest and feeling a little lost because she has no idea what to do next. If that's you, grab a cup of coffee or a glass of wine and let’s talk about rediscovering your identity, passion, and purpose so you can embrace the next phase of your life! Read More...

Want to look around?